Good friend of mine have rented cottage to have three families gathering for weekend. Cottage was big and meant for larger groups and located just near sea. After nearly 4 hours driving on harsh weather when snow pouring from sky we finally arrived there and didn´t get stuck on snow on narrow forestroads which was near. So after got kids sleeping it was time to have a supper and put hunting equipment ready cause we have decided to leave for hare hunting early in saturday morning and come back in afternoon when 3rd family will be there already and some other friends of hosts who came to visit on saturday.

Saturday morning had perfect weather for hunting. Snowing have stopped at night and new tracks of animals were quite easy to spot. Our hunting area was just around 10-15 drive away and some half hour hike with skis / snow shoes. I wanted to try snowshoes and my friend E used his old swedish army forest skis.

An open fields where snow was not that much skis were pretty good even near 0 deg temp they didn´t slide that well. But when we came into rocky forest area there snowshoes could show it´s "claws". E left his skis and trusted his long rubber boots being enough cause skis were extremely difficult to use there. 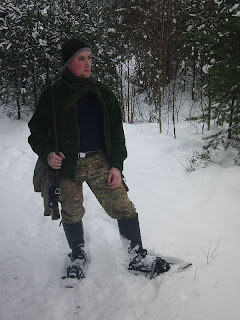 After some seeking we found fresh hare tracks and started to follow those to get it out of it´s hiding place. Soon I got firs eye contact on snow white forest hare, but it run over narrow open area bit too far for me to try to shoot with a shotgun, so I followed it´s tracks to it´s hiding place (where they often come back after some running around) and E went after the hare. I waited some 40-50 minutes there and no sign of returning hare. Then E called me that he and his brother have found tracks that hare have went more far and seems not coming back so I changed my position. That time there was 4 of us hunting together and trying to trap that hare.

We did our very best and still that forest hare was more clever, good for him! We were thinking to leave when we discovered new tracks this time brown hare and I started to follow them with E´s brother. Then suddenly I saw big bird somekind of hawk on tree and it attacked on hare! We discovered some hair and blood on snow after the fight so we lost that chance aswell.
We have been already out around 6 hours and we didn´t take much food with us cause ladies are going to prepare good meal on cottage so we headed back it would take anyway some half hour to reach our car.

On that trip I carried very minimal amount of gear that I could fit on my shoulderbag so basicly I had: 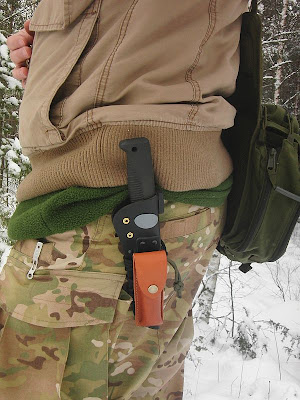 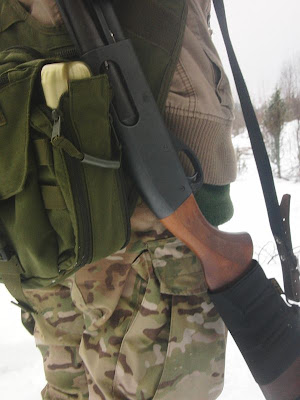 On cottage we ate well and went out for snow fun with kids and later took long bath, sauna & ice swimming which mighs sound grazy but is actually very good for health! 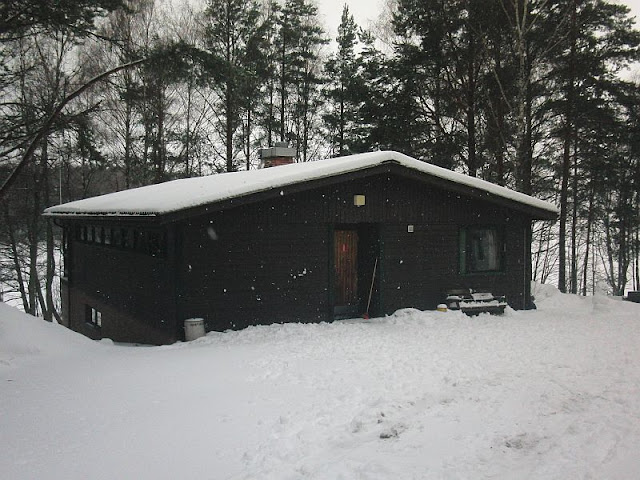 Search from THIS blog

Visitors to this page